The Tail of the Dragon is hidden way up in the mountains of North Carolina near Deals Gap. This dragon calls all MINI Coopers to come and do battle. Few come, fewer still defeat the dragon. 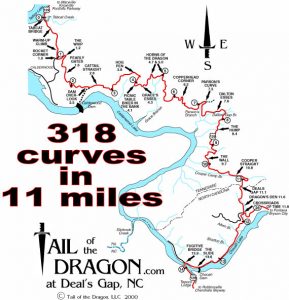 If you like the curves, regardless of what you drive, then the tail of the dragon is the road for you. There are so many hairpin curves, and so many people running the road, that there are photographers setting up camps at many of the curves who then put your picture online for you to buy.

The Tail of the Dragon is not only famous for MINI Coopers but motorcycles and many other types of vehicles enjoy the road too.

On this trip we had about fifteen MINI Coopers who were all doing MINI Takes The States 2016 who decided to forgo the standard route the rest were taking from Atlanta to Charlotte and head up to the Tail of the Dragon for a little fun. Everyone did indeed have fun, and only one ticket was received that I know of. It was so fun that the people who got the ticket wound up running the route again anyway 🙂

So how dangerous is this road? Start out with the fact that it is a pretty well-used road, including people in duallys pulling their boats or RV trailers as long as an eighteen-wheeler. Add in a healthy dose of sightseers and a bunch of people trying to run the route at speed and things get interesting.

The image below includes the “Tree Of Shame” where they hang parts off of motorcycles that have crashed. Car parts are usually hauled off by the wrecker so there aren’t really any memorials to them although there are a bunch who crash. 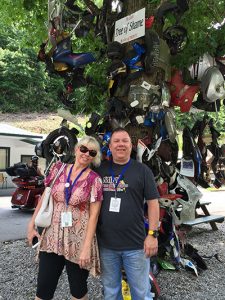 Do a search for dragon crashes and you will see a huge number of images of people doing things they don’t have the skill to back up. The results are not pretty. If you do run this route, check your ego at the door and don’t push yourself, or your vehicle, past the limits.

The image below shows the best possible outcome if you mess up, you trash your car. There are many others where they wind up in the other lane vs other larger vehicles or go off the cliff on the other side and then they lose more than just their insurance deductible.

Below is a video of the entire run (from the end of the route to the beginning as we had already run it once) which compresses the entire thing into just over six minutes. Any faster and I don’t think you get the full effect of how curvy and fast the Tail of the Dragon is.

Note that while Buster starts the route in the rear, he finishes in the front. Who says MINI Cooper Countrymen can’t hang?

Thanks for watching Buster run the Tail of the Dragon!