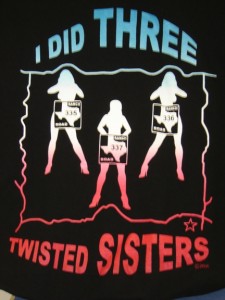 In the hill country of Texas there is a place like few others. A place where the hills are steep, the cliffs are rocky and the turns are sharp. A place where every MINI yearns to go, and where a MINI can truly be a MINI. This place is called…the Three Twisted Sisters.

Below is the three twisted sisters Texas route, and it is fun! 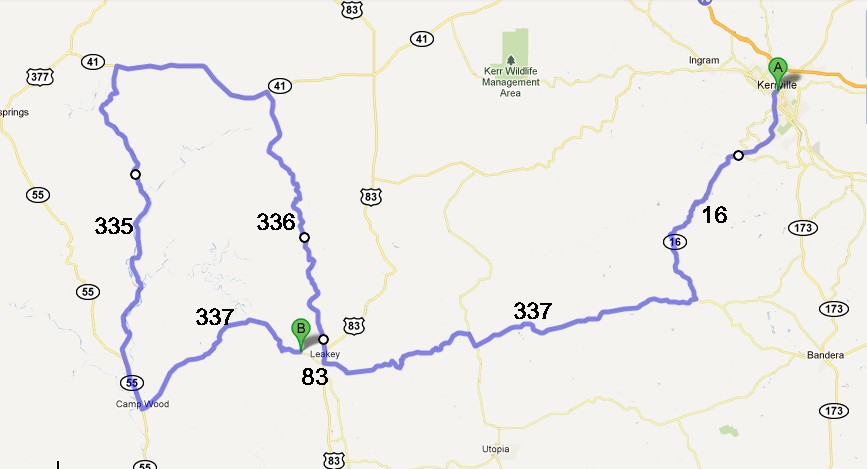 The three sisters are three Ranch Roads (RR), RR335, RR336 and RR337 that make a loop which unofficially starts and ends in Leakey (pronounced Lakey). The hub of this trip is the Frio Canyon Motorcycle Stop and Bent Rim Grill in Leakey. This road has more twists and turns, shear drops offs and rolling hills than anything I have seen in Texas. The three twisted sisters is very popular with motorcyclists and sports car enthusiasts who want a little more spice in their adventures.

My wife and I decided to meet up with the San Antonio MINI Cooper Meetup Group in Comfort Texas at ten in the morning on Sunday the 28th of February 2016. Well over forty MINIs showed up to run the three twisted sisters.

Buster is the fourth from the left side. The morning was heavily overcast and just a tad chilly but was forecast to clear up as well as warm up to around 78 degrees. Everyone was welcoming, friendly and excited. they discussed the route and how we would break up into two groups to run the sisters; the “spirited” group and the “sightseeing” group. I wanted to be in the spirited group but Sue Ann had previously shown that she was a little uncomfortable with some of my previous group driving with the Houston club so I thought I should try the sightseeing group. In fact she even brought a bag just in case her lunch needed to make an emergency exit from her stomach while we were driving. This was of particular concern since this was my first time here so I had little idea what to expect except for what I had heard, and that was a little intimidating.

Lets face it, Buster is a Countryman, a SUV, not a sports car. All the regular MINIs here were much lower to the ground, lighter, and had a much lower center of gravity. Sure Buster could be spirited, but keep up with the smaller MINIs in the twisties of the three twisted sisters?

Buster is one to the right of center. The day did indeed clear up and warm up. We spent the bulk of the day with the sunroof open. This is just part of the entire group running the three twisted sisters that day.

I wound up joining the spirited group more out of accident than intention, it just happened to be where I joined in the line. It wasn’t like the two groups left at different times or different exits. The spirited group split into at least three distinct groups almost immediately. The first was made up of veterans of this road and some John Cooper Works high performance MINIs. The second group was a little less Evel Knievel about things but still right at the edge of sanity (which edge is up to interpretation). The third group was still spirited drivers but were a little more sane in the curves and less heavy footed in the straights so we dropped them quickly.

The guy who was leading the third spirited group came up to me at the stop we made at 335 and 41 and said “Man, you guys were flying! We were doing XX and you just disappeared.” I responded “Well we were doing YY so that’s why you lost us.” Obviously I am not going to post speeds here because, well, we MIGHT have ever so slightly and completely accidentally exceeded the posted speed limit at some point and I would just as soon not get in trouble for opening my big mouth.

I have no idea about the sightseeing group as they always arrived very late to the party when we stopped. They seemed more concerned with seeing the countryside than pushing their MINIs and I completely respect that. I didn’t get to see hardly anything but bumpers and brakelights until I got home and watched the video. Sue Ann and I talked about going back and running it again slowly just so we can see everything.

As far as Buster’s performance goes, he did amazing. He held second to the back of the second group almost all day through all the three twisted sisters could offer. There was a time when we were the back of the second group, and a time when more than one person was behind us.  He did sway quite a bit more than the other MINIs we were with but never slid, never quivered, never strayed from where I pointed him. He, and not my driving skills, is the reason we did so well.

I have to admit there was one point where both myself and Sue Ann almost had to have Buster’s seats cleaned. We were in the roller coasters and there was some construction. They were repaving the bottoms of these coasters with fresh asphalt and there was some rock on the road. So far this was not presenting a problem because the hill down, dip and hill up were all in a nice straight line. Even if you slid a little on the rock, you weren’t going anywhere.

Then it happened. We crested the top of the last roller coaster hill and looked down, there was the fresh asphalt and the gravel. No problem. Then we looked at the other side which didn’t just climb up at a steep grade like the previous ones, but took a hard turn to the left. That’s bad, but it got worse. Coming out of the fresh asphalt were two tire tracks from a car that the driver obviously locked the brakes on. Those tracks led right into the guardrail where there was some damage, then swerved over to the vertical rock face on the opposite wall. Someone obviously hit the gravel at speed and tried to turn, slid into the guardrail bouncing off of it and then made a beeline for the mountain wall. If I had more time I would have screamed more profanities. I didn’t.

I remembered my motorcycle instructor’s words (Yes, I was in a car, but you will see why I remembered that) when he told me to hit the brakes, HARD, before you get into the thick of it and then release them to ride it out. I did. Buster’s nose dipped hard and the speed dropped. Right before the bottom I let off the brake and his nose rose back up keeping me from bottoming out in the dip. Then I just held on as we hit the gravel and I eased the wheel to the left, the tires held. I drove immediately to Wal-Mart and bought new underwear.  OK, so the Wal-Mart part I just made up, sue me.

After that I was a little nervous and approached the curves with just a tad more trepidation. I did however, remain in the second group for the rest of the run and was not always in the very rear.

Here is a video that shows about twenty minutes of the run down the three twisted sisters. There are several sections I spliced together. Unfortunately the 10MPH twisties right outside of Leakey didn’t get recorded but there still is some great footage.

While we were in the area, Buster wanted to take a trip to Easter Island and Stonehenge (there are very cool replicas in Ingram Texas, just outside of Kerrville).

All in all it made for a fantastic trip.

Thanks for reading about Buster running the Three Twisted Sisters!