Buster is the name of my 2015 MINI Cooper S Countryman in light white. Being a Countryman he is a little bigger than other MINIs (and the older I get, the more I resemble that remark) but that doesn’t change his attitude. His theme song is “I’m sexy and I know it”, spend a day with him and you will understand.

I brought Buster home around October 21st of 2014. It was exciting and yet I was a little apprehensive as this was my first non-standard car. By that I mean I had previously owned vehicles that were quite obviously cars; Camaros, four-door midsized sedans, one Nissan Sentra, etc. This was the first vehicle that you could classify as a non-car. I call him a small SUV, my insurance and registration call him a truck.

Below is a gallery of images that MINI of the Woodlands took of him as they were selling him.

Buster’s option packages from the factory as listed on the spec sheet:

Buster has gone through a lot of changes since he was new. When I ordered him I had them order bonnet stripes (the hood for you yanks), boot stripes (trunk for the yanks) and a roof graphic that covers the sunroof’s dual glass panels.

While quite at home flying through the twisting roads of the Texas hill country (with my wife’s hands out the sunroof as she screams woohoo!), Buster is not all flash, he is a work truck underneath. Although I really loved the look of the MINI Cooper Roadster at the dealership I was smart enough to know I needed some utility out of my vehicle. That led me to look at the Countryman.

On the left, he is carrying twelve 16″ x 16″ x 2″ concrete pads covered with ten bags of white marble rock back from Home Depot to make an area for my motorcycle to live.

On the right, he is loaded with a server, four workstations, all the monitors/cables/mouses/etc and four battery backup units (including one large 1500va unit for the server) as well as my tool belt, cordless drill and other tools to move a business office to another town.

I have had as much as thirteen computers in him at one time, with room to spare and the front seat/floorboard empty. Who says a Countryman is not big enough to be practical? 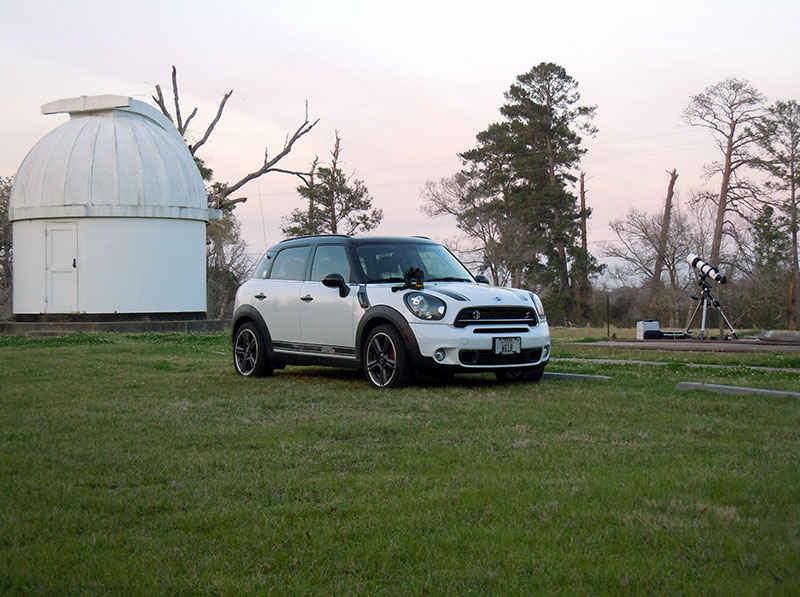 Even when relaxing, Buster is working carrying a full astrophotography rig out to the dark site for me. While not perfect for everyone, the Countryman is exactly what I needed; a unique small SUV with a good bit of the performance of most MINI Coopers, substantially more carrying capacity and higher ground clearance.

He has a lot of mods (modifications) check out the mods page for more on that. There is also a long list of things I want to do to Buster, he is very demanding. He should be demanding, after all, he is sexy and he knows it!

If you think Buster is as sexy as he does, you can get your own MINI Cooper Countryman!

Thank you for reading about Buster, my MINI Cooper Countryman!